In the mid-'90s I began working on a book concept called The Bang Gate Universe, [ Sounds like a sailor story, but thankfully no. ] The story was about AI [ Artificial Intelligence ] and where I thought it was headed. Robots have always fascinated me since Star Wars. Who doesn't like R2D2? This little robot is an awesome character that makes weird sounds and people clap when he appears on the screen. R2D2 had humanity and people sense that. R2D2 related to what people care about. R2D2 was not just a machine following some programmed protocol, he had self-awareness and duty. He was going to deliver a message no matter what he had to do, he had decency and determination.

Humanity is a core value I want my robot creations to have as well. I stopped writing The Bang Gate Universe story and went into a new direction...The Six Realms of Mythlande.

The Retro's in my made-up Universe were the first machines to experience self-awareness. GA is the acronym for Gained Awareness.
KG 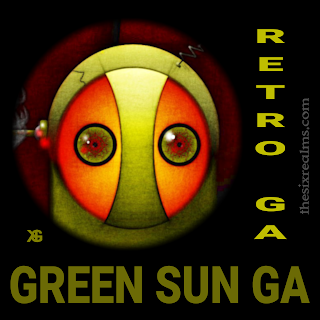 The Retro GA are stronger than you know.

Visit when you can...leave a question or comment there.

Welcome Mythlander! You seem a worthy adversary against those that would use the Mala Coire!

Mythlande Between the Smoke & Flame Series at Amazon.