MYTHLANDE TALES
This was one of the first Mythlande stories I wrote. It is when I began figuring out the actual size and scope of the Six Realm. 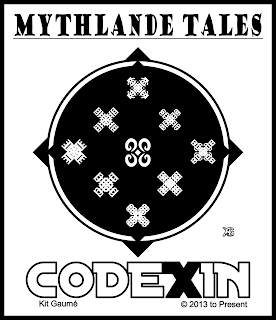 Odz was sitting in his favorite chair by the fire when Niner jumped on the armrest and handed the great Li’fyr a note.
The small rotund companion reported, “Your wooden dragon pal was making quite the fuss your magicalness. Seems that someone sent a messenger with a message. But was afraid to knock on the door because Splyndarian was busy shooting flames at the poor visitor.”
Odz opened the sealed note. It had the symbol of the Bound X CodeXin.
“Bounty Hunters? Kry?”He wondered aloud.
The Hi'dyn read the note. It was short: “I would like to buy you a cup of coffee, my friend. Just think the name of the place and when you can be there, then tap the note. I will be there post haste, Kry.”
“Outstanding. Some calamity to speak about over coffee sounds like my type of adventure.” He thought for a moment, then tapped the note. A purple flame appeared, and the invitation disappeared. Odz got out of his chair, stretched his wings briefly, and then put on his favorite hat. He grabbed his magical golf club and asked if Niner wanted to come along.
The golf ball man smiled and adjusted his small hat, “Of course. Someone needs to be there to keep you out of the rough.”
Odz went out his front door and asked Splyndarian, "What did you encounter that required flames?"
The dragon hung his head dejectedly and responded, “Robots are so rude Honorable One. When I asked who the message was from, it just kept repeating, ‘The man that paid for my new bearings lizard-breath’ That is all that metallic idiot would say. Lizard-breath! It made me so angry. Then Niner showed up acting like he is in charge of security and took the note. The robot made a rude gesture and left. I was going to announce the message myself, but Niner just took it and slammed the door.”
The Hi’dyn studied his wooden dragon friend a moment then said encouragingly, “My dear Splyndarian, you do an excellent job, and I wouldn't know what to do without you. You are no lowly lizard. You are a kingly dragon made from the oldest sacred oak.”
The carved dragon lifted his polished head and almost purred like a cat, then he glared menacingly at Niner, who was standing on Odz’s collar. The little round ball took off his hat and offered an apology. “I am so sorry, Splyndarian, I was wrong; hopefully, I can make it up to you, my dragony pal. We are going to our favorite place; I will make sure and get your favorite candy—twisty sticks!”
Splyndarian uttered in surprise, “I love their Fire Cinnamon Twisty Sticks the best. Thank you, Niner.”
Then the smiling dragon merged back into the forest carving on the large door singing some confectionary theme song:
There is a place called Cinnamon Land
Where all the beaches are candy sand
Magic taste and delicious places
Where fancy shoes have taffy laces
And the suns melted...
Niner actually wanted to hear the rest; he had no idea that his carved friend had such a beautiful voice. But the ArQai had pulled the door shut and had headed down the hall.

Odz placed his hand on the bounty hunter's shoulder. “This news breaks me asunder as well, Kry. You have discovered a shadow so blighted that a million suns may not pierce its darkness. Uncovering the Po’ol Stone connection is a start, though; it may be the key needed to unlock this vault of corruption. Do you remember seeing a stone like this on your two rogue bounty hunters or on the brothers? On a knife hilt perhaps or hatband—anything?
Kry thought back, and it hit him, “Riil has white stones on his belt, and Thro has a pinky ring he constantly fiddles with. It is the same white stone, I’m positive. The Gerada Brothers boots had strange markings and shiny baubles on their bootstraps. When I was attacked by the oldest brother, the Skrach he launched was from his boot, he is an Aga Drul, but the Essence he used was a piercing white glow; it looked more like your Soul Essence Honorable One and not the green light associated with the Tear Essences. But how can they hide the stench of the Mala Coire? ”
Odz massaged his invisible chin a moment,  “This Po’ol Stone may help us unravel this cloaked sickness. How a Mala Coire user can go undetected is something that needs to be solved. These stones must be able to filter the ones submitting to the Coire. A blending of all colors of the Essences to make something appear as pure white. Your two bounty hunters should reek of the Mala Coire, but I am sure they do not. Even a Gli’myr’s talent may not see this deception. Somehow this crystal is the connection these murderers have in common. I believe it will help me present the proof I need to the Queen. We are chefs stirring a ryyn pot, hoping that—it will taste like honey. You must muster all members of the Eight CodeXins to the Master's Hall, even if you have to drag every last one of them by the heels of their boots. Your first task as the X-Mark may be the hardest thing you ever do. Your new ring has power; it is a Klaen’ked token that detects honesty or falsehood in the soul itself. Those that are faithful to the CodeXin will kiss the ring without hesitation. Those that do not—”
Kry interrupted this time and said sadly, “—will be kissed by the blades of death.”
Odz nodded slowly and exhaled deeply, “I will have to figure out how to tell Queen Dasaerin that her favorite nephew is tainted beyond saving. She dotes on him. I may not survive the tongue-lashing that will rend my flesh or the wringing-of-hands that may crush my neck.”
Kry nodded solemnly, “We both face a daunting responsibility; the Eight CodeXins have been rudderless a long time. Honor has drifted far; it may not find its way to port easily. Good luck, my old friend. I will stay in touch. I will leave from here. The Vagari stood, drinking down the last of his coffee, then he shook Odzs’ forearm with a firm grip. Purple rings lit up the room, and the new X-Mark stepped into a forested landscape. The Thre'sh closed and dissipated behind him, leaving Odz thinking in the dark: another ArQai betrayal, another dagger in the heart of trust.

The End
Mythlande Tale - Written by HIM